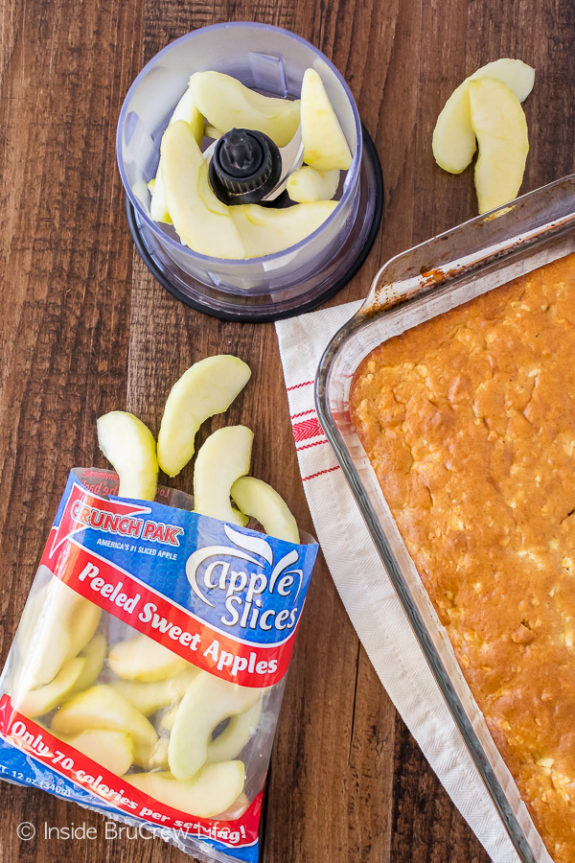 Creamy frosting and a dusting of cinnamon sugar will make this Snickerdoodle Apple Cake disappear in a hurry. One bite and you will be ready to devour your entire piece in seconds.

This week I sabotaged all of our healthy eating plans…with apples. I know that sounds kind of funny.  I mean how can you ruin healthy eating with a fruit, right?

Well, if you are me, you dice those apples into bits and toss them into cake batter. Those bags of apples in the fridge didn’t know what was happening.

The idea for this sweet cake has been rolling around in my head for some time now.  This week I finally put it together and then promptly ate half of it. I tried to keep telling myself that it was ok because I was just eating fruit. Okay, fine. It was fruit covered in the creamiest, most delicious frosting ever!

One of the perks of working with Crunch Pak apples is that we get bags and bags of fresh apples during the month that I am creating a recipe. My kids love having apples in the fridge, so that they can pack them in their lunches or eat them anytime.

I love having bags of apples on hand because I like to bake things like this apple praline cake and apple Snickers cake. Anyone else sensing a pattern? Apparently, I prefer my apple a day in cake form.

The past few apple cakes that I have made have been totally from scratch. So, this month I decided to show you how to jazz up a cake mix with three kinds of apple love.

Apple juice, applesauce, and fresh shredded apples give this fluffy cake a delicious apple flavor. I added some cinnamon to the batter and the frosting, so that the cake had more of a snickerdoodle taste too. 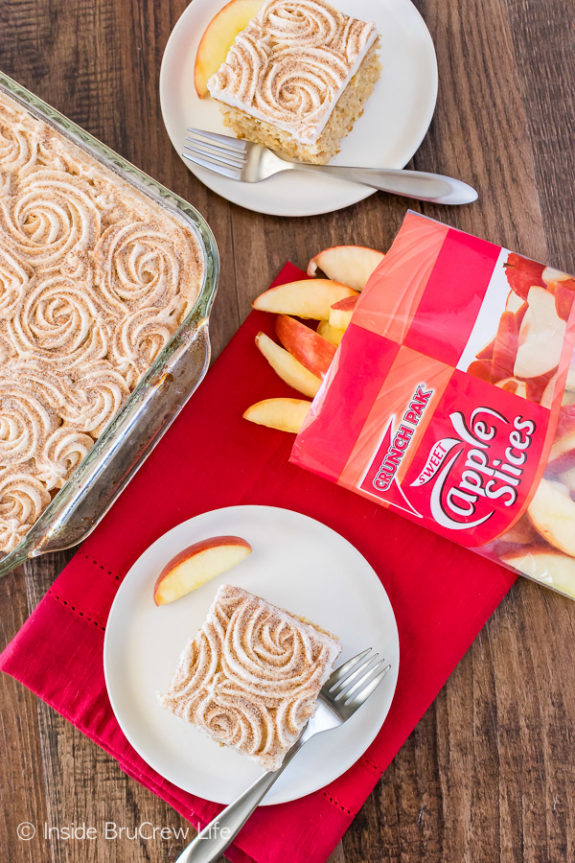 To finish the cake off I sprinkled cinnamon sugar on top of the frosting swirls. The last touch was to place an apple on top of the cake slices, so that they looked even prettier. I guess that means this cake actually has four times the apple love!

Our oldest son got home from school and had cake as soon as he walked in the door.

His exact words were that this cake was phenomenal! He also blamed me for ruining all his healthy eating plans for the week because now all he wanted was cake.

I know what you mean, son.  Eating two large pieces of this snickerdoodle apple cake probably wasn’t the smartest thing I did because now my skinny jeans hate me. But holy heck, did it taste great! I just couldn’t help myself.

Creamy frosting and a dusting of cinnamon sugar will make this Snickerdoodle Apple Cake disappear in a hurry.

For the Cake
For the Frosting
For the Topping

*You can also use a piping bag and large icing tip to swirl the frosting on top of the cake.